Agaves at the Chicago Botanic Gardens

Back in April, I posted some pictures of the large Agave americana in the CBG's succulent greenhouse. It had produced a tall flower stalk that had required them to cut out a section of the greenhouse roof. 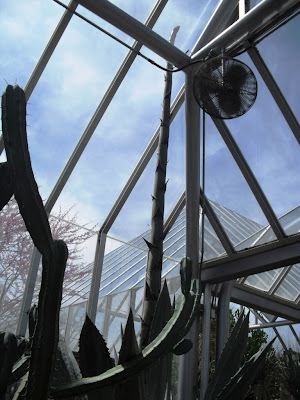 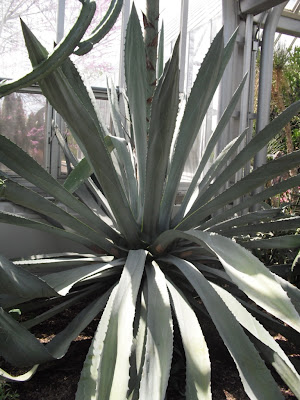 Previously posted pictures of the Agave americana from April, showing the flower stalk growing through the cut section of the roof, and the whole plant.

I visited the Gardens again on May 14, and took a some pictures of the stalk from outdoors, looking much the same as it did in April. 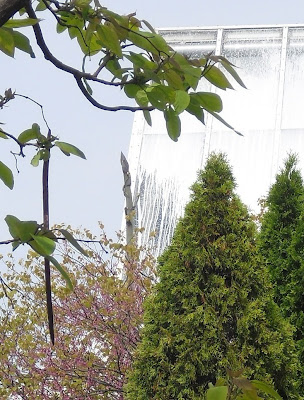 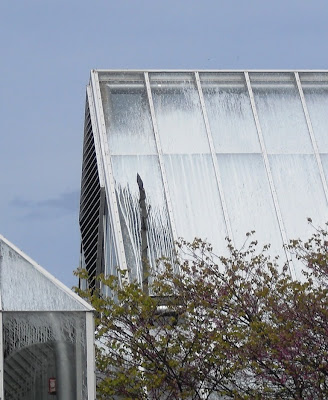 Two views of the flower stalk silhouetted against the greenhouse
But below is how it looked yesterday. Quite a change! 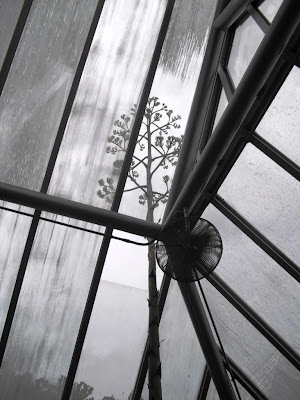 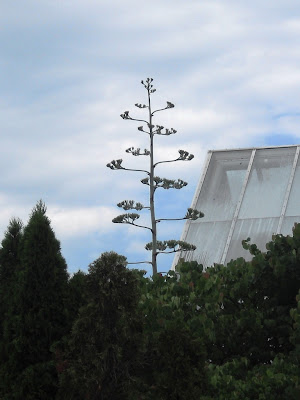 Two views of the stalk as it prepares to bloom, the first from inside the greenhouse, the second from outdoors
I will probably travel to the gardens several more times this summer, and will post updates if I can. (I hope the flower stalk survived the rather violent thunderstorms we had yesterday afternoon and evening. You can see how threatening the sky had become in the 15 minutes or so between the outdoor shot, and the one taken indoors.)

Of course, that isn't the only Agave to be seen at the gardens. Here are some others I saw yesterday during my visit: 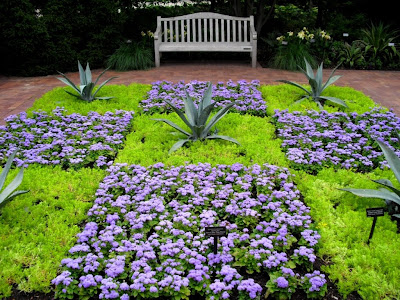 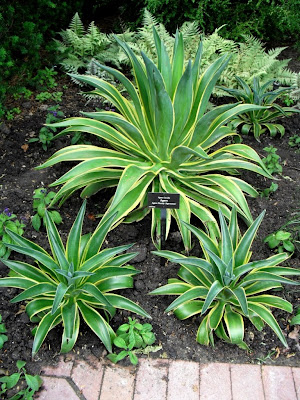 Also from the Circle Garden, a trio of Agave lucida. I had one of these for a couple of years. It became very unwieldy, and I had trouble finding a place for it indoors, so I left it outdoors last winter, knowing that it would succumb to the cold. Of course, now I regret doing so. 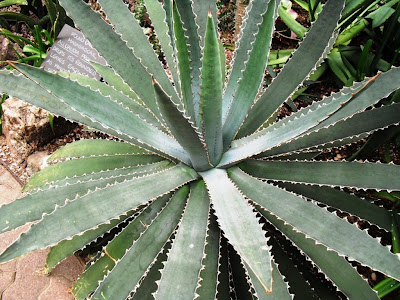 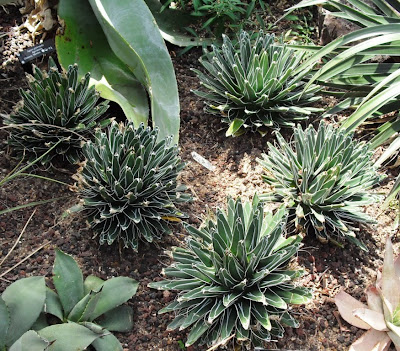 Agave victoria-reginae, also from the greenhouse

I do really like how the CBG incorporates succulents into various temporary installations in the display gardens, in addition to the more or less permanent greenhouse display.
Posted by Karen715 at 9:47 PM

Wow how amazing! It is finally starting to open! I do hope you post more pictures of it as it opens fully. Amazing how tall it is. And thank you so much for sharing the other great shots of this beautiful garden.

I don't particularly like Agaves (they fall into the category of "evil prickly things"), but I like that they remind me of summer holidays by the sea, and the plant we brought back from there, which turned into a huge monster with deadly thorns that we had to drag down to the basement every autumn and up again in spring - and yet, it was beautiful.
The flowerbed with the squares is pretty - why can't our gardeners come up with something like this?

@Candy: You're welcome. I may get a chance to go back on Friday (June 25.) If there is any notable change, I'll be sure to take pictures.

That checkerboard pattern of succulents is stunning...I wish I could do that all in my swail here. Wowzers!!!

Just found your blog through a search on ageratums. I hope you keep posting. I didn't see a followers button.

What it's all about

Although this blog is (mostly) about my houseplants and garden, it is also about my life. (You've been warned.) While I hope that at least some of what I write is of practical interest, the main focus of Life Among the Leaves is on the feelings inspired by growing and caring for plants.

Karen715
Karen715 is a New Yorker relocated to the Midwest. As such, she maintains that the proper name for sweetened carbonated beverages is Soda, not Pop. She lives among the leaves with her loving husband and a mischievous cat. On occasion, she has been referred to as a "Crazy Plant Lady," an epithet she embraces wholeheartedly.