One plant that I love, but have had poor luck with, is Solenostemon scutellarioides, more commonly known by its former Genus, Coleus. During my many years of living in apartments, I had trouble keeping them for the long term as houseplants, so I eventually gave up. I never stopped loving them though, so once I got married and moved to a house with a yard, I started buying them again, and even grew a few from seed. I did so every year, fully intending to enjoy them as annuals just for the season. Then every year as frost approached, I couldn’t bear to give them up, and would bring a few in. They’d go along for a short while, and then something would happen. I’d miss a watering and they would drop leaves. The winter sunlight wasn’t strong enough, and their vibrant colors faded to a distressing degree. They would begin to flower, and the plants would lose vigor. Or worst of all, they would get mealybugs.

So, I gave up on Coleus, at least as houseplants. Maybe twice in the past six years I have been able to overwinter one until it is time to put it back out. The picture below is of my greatest success thus far. I bought a small plant at an end-of-the-season sale, and managed to keep it, and a couple of cuttings from it, alive over the winter. In the spring, the cuttings were put outside, and this plant is the end result. (I believe that this was the variety ‘Freckles’, which is a PPAF plant, and thus I probably should not have propagated it. But I bought it unlabeled, and I didn’t know its identity at the time.)

Freckles: my first overwintering success
But last winter, I borrowed a book on Coleus from the library. I was captivated by the pictures and descriptions of the various cultivars, and vowed that I would try to grow them indoors again. I recalled, from many years ago, the time that I put a Coleus under fluorescent lights. Though the plant didn’t survive for various reasons, I remembered that the foliage that was close to the lights colored up very nicely. Hmm. Maybe if I put them under lights, and payed very close, loving attention to their care, I could make it work. I decided to buy some Coleus, enjoy them for the summer, then put them under lights in the fall and see what happened.

So I went shopping at a bunch of nurseries this spring. None of the shopping trips were exclusively for Coleus, (I’m not quite that single-minded) but I was definitely keeping an eye out. And I was quite disappointed. The season’s Coleus fashion seemed to be for plants in rather dull oranges, maroons, and greens, with the occasional muted rose. All of these were attractive enough taken singly, but together the colors reminded me of more bruises than of lovely, exotic plants. Where were the deep roses, the rich oranges, the yellows and vibrant chartreuses of a few years back? Not only were the named specialty cultivars disappointing, there even seemed to be less variety among the flats of ordinary seed-grown Coleus.

But I am nothing if not intrepid, and through careful picking and choosing, found several plants that I liked. They spent the summer on the porch, in front of the table of ivies, while I prepared my strategy for bringing them in. 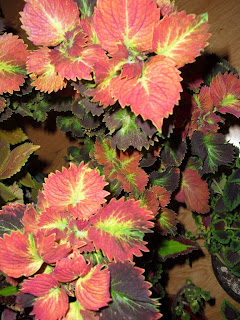 'Tilt-A-Whirl,' one of the cultivars that I chose
I asked my husband to build a framework from which I could hang a 4-ft shoplight, which I decided would go in our bedroom. Not the greatest thing from a decor standpoint, but at least if I had to look at them every morning, I would be more likely to notice any problems immediately. Sometimes the plants I keep in the basement (where I keep my other light stands) get a trifle neglected. I don’t go down there every single day, so out of sight, out of mind. This is okay for the succulents I usually keep down there, since they rather like being left alone, but not for other types of plants.

I also bought some systemic houseplant insecticide, containing imidacloprid. I’m not crazy about using strong chemicals, and I avoid doing so when I can. But I will not abide mealybugs. I treated each of the plants as I brought them in. 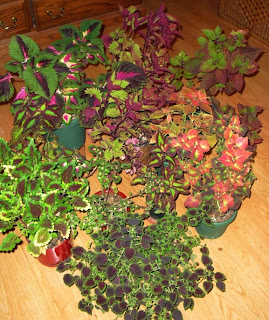 The group, after I brought them in
Here they are, in place indoors under the lights. 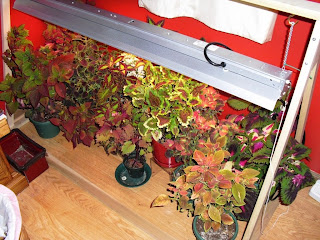 Light stand, built for me by Bob
So this is where I am, today. I am determined. I will overwinter my coleus under lights. I will keep up with the watering. I will pinch out the flowers and pinch back the foliage for optimum growth. I (oops, I mean they) will survive! 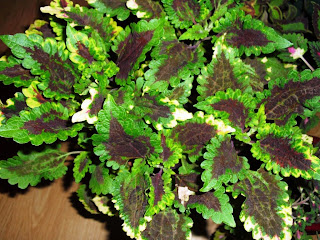 'Florida Sun Splash' It already has more yellow than seen here, since it has been under lights.
(And I promise to ‘fess up if things don’t work out.)
Posted by Karen715 at 3:54 PM

Ugh. Coleus. Right there with you. I'm actually really relieved to find out it's not just me.

I managed to overwinter one fine in the apartment last year, and even managed to propagate it there too, but most of them went outside once we moved to the house, and the ones that stayed in got chronically underwatered, and weren't getting enough light, and eventually looked so miserable I threw them out. I took some cuttings off the plants I had outside, though, and I'm going to try growing them under lights this winter just as soon as I can figure out another place for lights to go. I'm not necessarily optimistic about this, but considering what people are going to be charging for 4-inch coleus in the spring, I think it's worth my time to try.

Also, because you mentioned it: 'Tilt-a-Whirl' is awesome.

Which reminds me, I should probably be working on the coleus plant profile.

Oh, yes, Coleus. I write about them and praise them and brag about them. But in the end, I too fail at keeping them indoors for long periods. You are certainly not alone...

But good luck with this time around. I really hope you succeed!

The secret is wick watering on a water container and artificial light in the winter.

What it's all about

Although this blog is (mostly) about my houseplants and garden, it is also about my life. (You've been warned.) While I hope that at least some of what I write is of practical interest, the main focus of Life Among the Leaves is on the feelings inspired by growing and caring for plants.

Karen715
Karen715 is a New Yorker relocated to the Midwest. As such, she maintains that the proper name for sweetened carbonated beverages is Soda, not Pop. She lives among the leaves with her loving husband and a mischievous cat. On occasion, she has been referred to as a "Crazy Plant Lady," an epithet she embraces wholeheartedly.